I was happily married for 17-years before my husband suddenly passed, but even then, I did a lot of stuff around the house.

Eric was a football coach and he was incredible at it, but that just didn’t leave a whole lot of time for him to be here at the house working on the ‘honey-do’ list. Don’t get me wrong, there were things that only he did because they exceeded my know-how… but if something needed done and after I read some blogs about it and watched some YouTube videos, you better believe I could tackle it. And if it exceeded my know-how and I knew Eric wouldn’t get to it for 6-months, I’d figure out who to call. ?

Since he passed away though, that leaves me as a solo female parent. And while I have an incredible community and family of resources, I still like to do shit on my own. Because it’s empowering and because I can. And there’s been so much that I’ve learned along the way.

One thing I’ve come to appreciate, learn, and love are female friendly power-tools. I now have more in my garage than I do in my bedroom closet in that secret basket, which apparently ain’t so secret anymore because I just announced it on my blog. ?

I have these garage-stored power-tools because shit needs done around the house. And because I bought a salvaged fifth-wheel as a project. Because there’s no one to text and have over here for the little stuff - I mean, they would… but I feel bad about contacting then always for shit. And besides, I can. And it’s empowering.

I am woman, hear me ROAR.

I’m gonna share some of my most badass lady-friendly favorite power-tools with you and why.

(And yes, I have affiliate links to amazon for each product so you can find them easily and so I can make a few cents on each of tools because, let’s face it… I’m the sole breadwinner these days. #DamnItEric )

Don’t let a power-drill intimidate you. I worked with screwdrivers for way too long before I finally broke down to learn the power-drill. And now I’m like - WHY DID I WAIT SO LOOOONG?!?! It’s the handiest thing to have in your garage. Any time you need to tighten a screw, hang something - and, let’s face it, there’s a million things to hang or fix as a homeowner… this is your friend. But when I first bought one I bought a 8-volt one because it said it was a good beginner one. And I used it. But then there was something I needed a tougher job for and I borrowed my father-in-law’s 18-volt power-drill. This one, actually, and I liked it so much that I had to buy my own and now I look at the 8-volt as my baby drill. ? This drill comes with a Phillips and a flat-head bit. It has a magnetic little tray, its’ easy to use and it does most jobs you’ll come across. Save your money and just start with the one you’ll need/want anyway. You will need to purchase an 18v battery, in fact, I recommend you have two batteries and a 30-minute charger for all your power-tool needs. And that’s next…

You’ll definitely need more than one 18v battery. Just get them now, because you’ll wish you did. You use a battery, you charge the other. And this charger gives them full juice in only 30-minutes. For most jobs you’ll run across, this will be all you need. It’s an investment, yes - those batteries aren’t cheap - but you’ll purchase it one time and be done.

The leaf blower has been handy as a homeowner. I use it mostly to clear the leaves out of my garage faster and with minimal effort, as well as shit off the driveway. Literally slide up a button and blow them out. A helluva lot easier than brooming it. Although I also blew out some packed leaves from the bushes in the front yard and while it worked, it took a little longer than I would have liked because it needed a little more oomph, but for the most part, I’ve been pretty happy with this.

Especially since I purchased the salvaged camper, there’s been a lot of sawing that I’ve needed a circular saw for. And since I have it, I’ve also added additional shelving to my master closet as well as my laundry room.

The circular saw maybe isn’t a tool for everyone’s needs, but since I use it often now I thought I’d list it as the one I use.

Talk about massively lady-friendly! I needed to powerwash the camper one day and I borrowed my neighbor’s powerwasher… which was great! BUT… It was gasoline-powered and awkward to use. But I enjoyed the results so well that I  got online that night, did a shit ton of research and decided on this guy! I’ve been in love ever sense. Plus, I’ve let some friends borrow it and they definitely compliment me on how easy it is to use!

This guy comes with 5 spray nozzles that are kept on the back (the yellow one is my favorite everyday usage one.) You can put soap in the front container if you want. You literally hook it up to the hose. Plug this sucker in. Turn the water on, spray with your gun and you’ve got the cleanest shit ever! I’ve powerwashed my house, my wood fence, my driveway, my camper. And now as I’m driving around I’ll see a house and wonder if I brought my powerwasher over if they’d let me clean their house for free because it’s incredibly instantly satisfying! ?Kidding, not kidding.

Take a look at the difference with the powerwasher!!!

Depending on the day, it can be more satisfying than sex!

FREEBIE GUIDE :: what to know and do because someone died 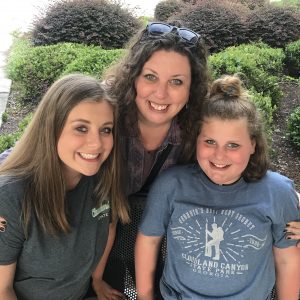 Telling my kids was a nightmare.

But the hardest thing I’ve ever done is learn to heal from my grief, find my aliveness without regret or guilt, and move forward in life with joy in Eric’s absence.